Many Molecular Shirts designs are “puns” on chemistry related subjects – you could call it “occupational humor”. Here you’ll find the jokes “explained” for visitors with little or no knowlegde of chemistry.

Chemists have developed a “shorthand” method for describing the structure of proteins and peptides. In this method each section of the molecule (Amino Acid) is represented by a letter of the alphabet. This method is known as The Single Letter Code. The standard list of amino acids and their respective single letter representation can be seen in List of Standard Amino Acids. The International Union of Pure and Applied Chemistry IUPAC takes care of selecting appropriate methods for describing and naming molecular structures – see IUPAC nomenclature . A full description of the single letter protein and peptide code is available in the IUPAC site. 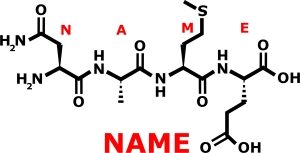 In the “NAME” structure, the first amino acid unit begins on the left with the H2N group (the bottom one) and continues until the first =O group. The section branching up to the top left H2N group (“side chain”) defines this unit as N or Asparagine. The second unit in the chain begins with the NH and continues until the next =O. This side chain defines this amino acid as A or Alanine. 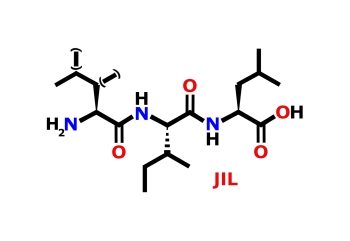 Special letters in the code

Some letters in the code are special: they represent cases where there is uncertainty as to the identity of the amino acid residue in that position. This uncertainty may arise from the method used to determine the identity of the amino acid (see List of Standard Amino Acids). These letters are: X (residue of unknown identity), Z (the residue is either Q or E), B (the residue is either N or D) and J. The letter J is employed when there is uncertainty between Leucine (L) and Isoleucine (I). Leucine and Isoleucine are isomers. They differ only in the position of one methyl group. In Leucine this methyl group is on the gamma carbon, while in Isoleucine it is on the beta carbon. In the JIL name molecule on the left the different positions of the methyl group in I and in L can be seen. In order to depict this uncertainty we have designed a structure for J having a methyl group in both positions – but in parenthesis. 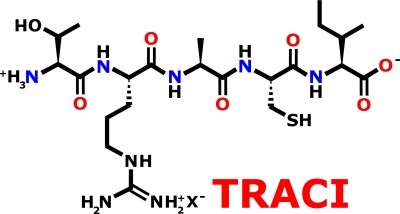 Acidic and Basic groups in Peptides

Peptide molecules have acidic and basic groups. The amino terminus of each peptide contains the -NH2 group, which is basic. This functional group will form a salt under the pH conditions present in the blood or other tissues. The carboxy terminus has the acidic -COOH group, which will form a salt as well under physiological pH. The counter ion for the -NH3+ group can be any anion which is present, such as Cl-, while the counter ion for the -COO- group can be any cation present, such as Na+. The amino and carboxy groups can form an internal salt (a Zwitterion) in which the -NH3+ group is the counter ion for the -COO- group. Many peptides have additional basic or acidic functions, such as the guanidino group in the side chain of Arginine (R) residues, or the carboxy groups in the side chains of Aspartic (D) and Glutamic (E) acid residues. Under physiologic pH these groups will form salts as well. At the isoelectric pH the peptide is electrically neutral. Since the position of the acidic hydrogens is not uniquely defined, as it depends on the conditions (e.g. pH) under which the peptide was obtained or is dissolved in, for the purpose of designing name molecules the unionized structures are used. The NAME structure shown previously is in the unionized form. Above is a representation of the name molecule TRACI in which the ionized structure is shown. (Thanks, Traci). 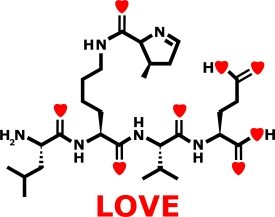 Almost anything can be spelled using the single letter protein and peptide code (see Spelling with Molecules above). In the structure of the LOVE molecule the oxygen atoms were replaced by little red hearts. (The letter O is represented in this structure by the amino acid residue Pyrrolysine. Prior to the recent recommendation by IUPAC to use the letter O for the newly discovered amino acid Pyrrolysine, there was no official recommendation for O, and many peptide chemists used O to designate Ornithine. Our previous LOVE design had Ornithine as the O residue). 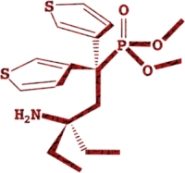 Chemists use special diagrams in order to represent the 3D structure of Molecules. With a little bit of imagination, you can create molecular structures that look like Insects, Snakes, faces and more…
The nicknames we gave these creations (Phosphonosect, serpental) reflect their chemical components and structure.

Caffeine is the molecule that puts the “kick” in your coffee, Fluoxetine is the active ingredient of Prozac®. These Molecules are described by chemists using special diagrams. Famous Compound products feature designs based on these molecules.

Developed by Shoof
Scroll to top
Skip to content